Well, folks, as of today, we are officially 8 weeks away from the release of HEX HALL! I'm so excited that I cannot even handle it! In celebration of this, I thought it might be kind of fun to have a weekly feature "interviewing" some of the characters from the book. And where better to start than with the leading lady herself? (Ed. note: It's notoriously hard to get pictures of Prodigium, especially those living at Hecate Hall. Where possible, I've been able to use artist renderings, but in some cases, I'll have to use pictures of actors/models that come closest to matching the physical descriptions of the subjects.) 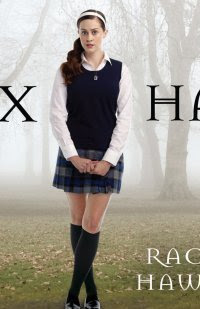 Name: Sophia Alice Mercer (but I go by Sophie. Living in the South means that people tend to pronounce Sophia as "Soo-fee-yuh." No thanks.)

Favorite color: Anything but pink. Trust me, if you saw my dorm room, you'd understand.

Species: Okay, first of all, seriously? Species? That's the best word you could come up with? Ugh. I'm guessing you mean what kind of Prodigium I am. Witch.


Relationship Status: Ugh times two. "It's complicated" doesn't even begin to cover it, so for now let's just say "Single." Or maybe "Planning to Become a Nun."


What Do You Look For In a Friend?: Loyalty, a sense of humor, and unquenchable bloodlust. What can I say, having a vampire for a BFF has changed my priorities a little.

What Do You Look For In a Guy?: Snarkiness, intelligence, not having a girlfriend who may be in league with Satan, dark eyes, a killer smile- um, wait, can we scratch those last three things? Seriously, DON'T PRINT THAT. (Ed. note- Sorry, Soph!)


Who Is Your Hero?: My mom, without a doubt. And maybe Mrs. Casnoff, the headmistress here at Hecate Hall. Her hairdo alone demands hero worship.


What 3 Things Would You Take to A Deserted Island?: My boxed set of Anne of Green Gables books, an iPod (oh, technology, how I miss thee! No cells phones, mp3 players, computers, or Anything Else That Is Awesome here at Hex Hall. Blah.), and a broom for easy travel around the island. Yes, sometimes I ride a broom. Deal.

Lastly, do you have a motto?: Um...Life's a Witch, and then You Fly? Get it? It's like when people say...yeah, don't print that either, okay? I swear to God, my lameness can probably be seen from space. Stupid survey.


Thanks, Sophie! Those were some, uh, interesting answers! In addition to the interviews, I'll be posting little snippets of HEX HALL that best show off the "interviewees." That's obviously kind of tough for Sophie, what with the whole book being told from her POV and all, but here's a scene that I think captures her general "Sophie-ness!"

I stepped out of the car and into the hot thick heat of August in Georgia.
“Awesome,” I murmured, sliding my sunglasses on top of my head. Thanks to the humidity, my hair felt like it had tripled in size. I could feel it trying to devour my sunglasses like some sort of carnivorous jungle plant. “I always wondered what it would be like to live in somebody’s mouth.”

In front of me loomed Hecate Hall, which, according to the brochure clutched in my sweaty hand, was “the premier reformatory institution for Prodigium adolescents.”

Just a fancy Latin word for monsters. And that’s what everyone at Hecate was.

That’s what I was.

Up next Tuesday: Sophie's roommate and BFF, Jenna Talbot!
Posted by Rachel Hawkins at Tuesday, January 05, 2010

Ahhh I can]'t wait til Hex Hall comes out :) It looks so interesting, and now the interview has made me more curious :)

Love it! I am so excited about the book!

Love Sophie! I'd take the box set of Anne of Green Gables too!:)

Great web site. A lot of useful information here. I’m sending it to several friends ans also sharing in delicious. And obviously, thanks in your effort! 야설


Admiring the time and energy you put into your blog and in depth information you offer. It's good to come across a blog every once in a while that isn't the same outdated rehashed material. Fantastic read! I've bookmarked your site 일본야동
Also visit my web site 일본야동

I would like to thank you for the efforts you have made in writing this article. I am hoping the same best work from you in the future as well. 일본야동
Also visit my web site 일본야동

I have read your blog it is very helpful for me. I want to say thanks to you. I have bookmark your site for future updates.
야설
Also visit my web site 야설

Hi everyone, it’s my first go to see at this web page, and paragraph,
I am very satisfied with visiting here. Thank you for good content. And please visit my website as well.
섯다

What’s up, yes this paragraph is really good and I have learned lot of things from it concerning blogging.
스포츠토토

Your good writing makes many people feel happy.
With a lot of writing, you are moved a lot. I also have a lot of interactions with you, I want to feel alive and be happy, saying that I will be a good friend with you, and I will be very happy too. I hope there are always good things and happy days. I always cheered for you.
Thank you!
성인웹툰

I was impressed by the good writing.Thank you.
If you want to know the social graph game, come here!
Great article, totally what I was looking for.
토토사이트