Ooh, boy. This is an exciting one! I think just about every email I've gotten from people who've read HEX HALL mentions Archer. He's just the kind of guy that makes a big impression. ;-)

So let's talk about he came about, shall we? Like Jenna, Archer didn't exist in the 1st half of the 1st draft (which makes me think, "MAN, did that 1st draft SUCK LIKE WHOA!") I love it in stories when you don't automatically know who's going to end up with whom, and where the audience roots for characters to get together before the characters even realize they should maybe hook up. That's way more fun to me than the, "I saw you across the room, and LO, your hair did SHINE, and my loins did TINGLE, and IT IS ON, BABY."

I had this idea writing the first book that Sophie would develop a crush on the typical popular, hot guy at Hecate Hall, but that her real OMGTRULUV 4-EVA wouldn't be introduced until either very late in the book, or maybe not until the 2nd book, and then readers would be all, "I SEE WHAT YOU DID THERE, HAWKINS."

But there was a problem with this idea.

Because I knew this guy, Justin the werewolf, was not The One for Sophie, I put no real effort into him. He was just kind of...boring. And what's worse, Sophie thought he was boring. Whenever I wrote scenes with the two of them together, there was no spark, and things I meant to come off "witty banter" were more like "borderline hostile."

So I killed Justin the werewolf in the Great Character Massacre of 2008 that also saw the death of Lexie the faerie (well, actually, he didn't totally die. I just made him younger, smaller, and relegated him to a background player. I think he's happier there.)

I went back to the drawing board on Decoy Love Interest Dude, and decided that decoy or not, I would just throw everything I found particularly swoony about (fictional) guys onto this guy. He would be smart. He would be snarky. He would have killer hair.

The only thing missing was his name. Luckily, I found a completely amazing baby name book, and in it was a whole section on last names used as first names. It gave all the usual suspects- Harrison, Jackson, etc.- but at the very bottom of the list was the name Archer. And I just knew that was his name.

Once the name was in place, Archer Cross just came blazing to life. Like Jenna, he just "clicked" into the story better than Lexie and Justin ever had.

And- THANK GOD!- Sophie liked him, too. In fact, she liked him so much that there was no way he could be a decoy love interest anymore. (No one puts Archer in a corner.)

But best of all, Archer came carrying VAST BOATLOADS of back story that ended up playing a huge part in future books, but we will not speak of that now. ;-)

So let's meet him! 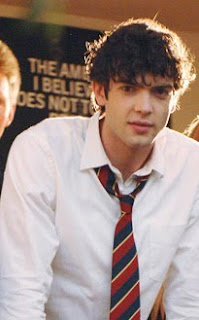 Favorite color: Chartreuse. You thought I'd say black, didn't you? Gotta keep you on your toes.

Relationship Status: Have a girlfriend, Elodie, but things are kind of weird on that front right now.

What Do You Look For In A Friend?: Someone to hold me when I cry, braid my hair, and watch The Notebook with me. Come on, you didn't actually think I'd answer that.


What Do You Look For In a Girl?: Same thing I look for in a friend. Hey, you laugh, but in some cultures, hair braiding is considered foreplay. Okay, okay. A sense of humor is always a cool thing. So is caring about things that aren't shoes. I also seem to have a weird thing for freckles and crazy hair these days.

Who Is Your Hero?: You, Random Survey Writer Person. The originality you've shown in writing these questions is nothing short of heroic.

What 3 Things Would You Take to a Deserted Island?: A boat, a radio, and some gasoline. Duh.

Lastly, Do You Have a Motto?: Not really a motto, but a quote I always dug from The Scarlet Letter: "No man for any considerable period can wear one face to himself and another to the multitude, without finally getting bewildered as to which may be the true."

Thanks, Archer! That was...well, very you. And now a snippet!

“May I add, Archer,” the woman continued, turning to the dark-haired boy, “that while this young lady is new to Hecate, you know better than to attack another student.”

He snorted. “So I should have let him eat her?”

“Magic is not the solution for everything,” she replied.

“Archer?” I asked, raising my eyebrows. Hey, you might be able to take away my magical powers, but the power of sarcasm was still at my disposal. “Is your last name Newport or Vanderbilt? Maybe followed by some numbers? Ooh!” I said, widening my eyes, “or maybe even Esquire!”

I’d hoped to hurt his feelings or, at the very least, make him angry, but he just kept smiling at me. “Actually, it’s Archer Cross, and I’m the first one. Now what about you?” He squinted. “Let’s see . . . brown hair, freckles, whole girl-next-door vibe going on . . . Allie? Lacie? Definitely something cutesy ending in ie.”

You know those times when your mouth moves but no sound actually comes out? Yeah, that’s pretty much what happened. And then, of course, my mom took that opportunity to end her conversation with Justin’s parents and call out, “Sophie! Wait up.”

“I knew it.” Archer laughed. “See you, Sophie,” he called over his shoulder as he disappeared into the house.


Next week's interview will be with Elodie, Hex Hall's resident bad girl!
Posted by Rachel Hawkins at Tuesday, January 19, 2010

Hahaha. This was so him. Have I mentioned that I kind of love him? If I was in your book, I would be the girl in the corner stalking him. haha.

Hahaha...this was so fantastic. Thanks for sharing!

OMG, that friend answer made my laugh out loud for real. So Archer!

Ooooh, how I love me some dark haired, dark eyed boys (especially that one!). I can see why Sophie has a crush on him--if he was, ya know, 18 or older, I would, too.

(Okay, so I totally think he's hot and would probably get all giggly around him, and oh dear God please tell me he's 18, because I already feel like a big enough pedophile for how much I blush when Taylor Lautner rips off his shirt.)